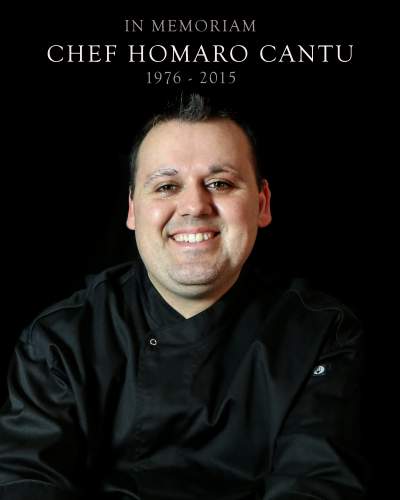 It is with great awe and regret that Best Chefs America pays homage to the visionary chef Homaro Cantu of the famed Chicago restaurant Moto. Cantu passed away at age 38. He takes with him an arsenal of culinary knowledge and leaves behind an international legacy. The Cook County Medical Examiner reported the cause of his death as suicide.

Cantu is featured as a Best Chef in our 2013 guide. He is highly regarded by his peers for his scientific approach to the culinary arts, which was supposedly sparked by his stint working in fast food.

At the Michelin-starred Moto, he specialized in molecular gastronomy. His food stimulated  the senses with out-of-the-box tasting menus that featured micro greens and other plants grown in the Moto office that Cantu converted into an indoor garden using his original inventions.

His preparations were interpreted as both bizarre and exceptional. He made paper menus people could actually eat. He could turn green juice and granola bars into french fries with ketchup. In an early conversation with Joseph De Vito - the investor behind Moto - Cantu dreamed out loud about levitating food, which he then tried to create using helium, liquid nitrogen and other superconductors. The names of his dishes featured pop culture prods, like “Surf & Turf with MC Escher”. And yet, his food was both a show and surprisingly substantial. It tasted good. So much so that the pricy fine dining adventures at Moto continued to attract consistent clientele.

Cantu's talents touched all facets of the restaurant industry - from feeding people to philanthropy. He helped found the Chicago-based charity called the Trotter Project in honor of his father-figure Charlie Trotter. The nonprofit is designed to unite and inspire both budding and seasoned culinary aficionados through educational events and programs.

Cantu, who grew up homeless, had ideas to redefine mainstream perceptions of food to offer solutions to social crises. He campaigned on behalf of the miracle berry - a fruit from West Africa with the power to transform palates, morphing unpleasant tastes into sweeter flavors. Cantu believed the miracle berry offered a way for people to step away from the sugar and enjoy more healthful foods; no longer quite as bitter, yet still nutritious and green.

He is quoted in the 2011 TedX talk to eating grass while ‘flavor tripping’. Under the power of the berry, he said the blades tasted like basil. His attempt to open iNG, a restaurant revolving around the miracle fruit, closed after two years. However, Cantu thought the African fruit had the potential to alleviate panic surrounding food scarcity.

Ryan McCaskey of Arcadia, another Best Chef located in Chicago, knew Cantu. He worked with nine of Cantu’s former star employees from Moto in less than four years. He says people closest to the chef called him Omar. McCaskey, as well as everyone else interviewed, consistently regards Cantu as a man of unparalleled passion, bubbling with brilliant ideas. According to McCaskey, these ideas may not have always been organized. However, they were always intended to help others in some way.

“He wanted to better the world,” says McCaskey. “It seemed every time I hung out with Omar, he had ideas about something. He wanted me on board, wanted my help. His eyes would light up, a smirk on his face, as if he knew something we all didn't or wouldn't understand.”

Reasons behind his suicide are unknown. Cantu was busy working to open a brewpub called Crooked Fork in Chicago. In an article in the Times, Trevor Rose-Hamblin, Cantu's partner in Crooked Fork, said the chef seemed happy, that he was looking forward to the future. This makes the cause of his death seem all the more mysterious.

Memories of his larger-than-life spirit live on, as well as his wife and two daughters.  Donations to the family can be made to: