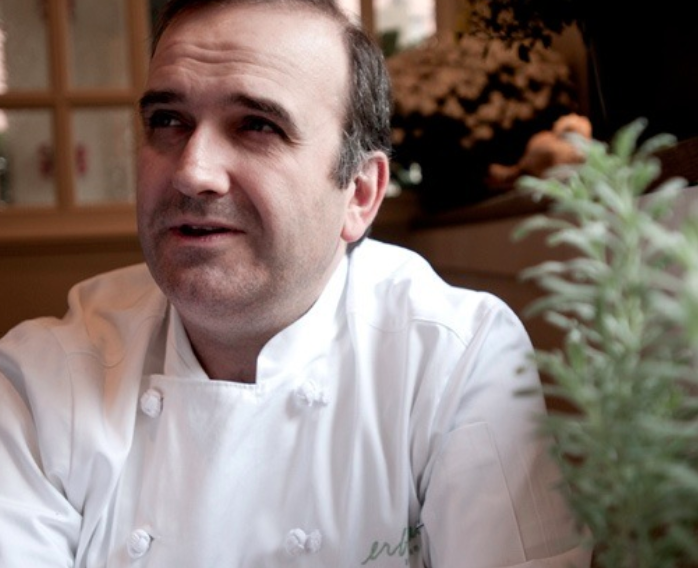 Like many of our Best Chefs, Charles Draghi of Boston's Erbaluce is more than a cook. He moonlights as a playwright. He's a poet.

And he cooks without butter. He may be one of the only chefs in America to so strictly do so.

"Cooking and writing are very much opposite concentrations," says Draghi, who has found ways to link the two passions through food writing.

"Writing requires you to sit alone and focus. To work in a restaurant is to be surrounded by chaos and to try to create order out of that."

To be a playwright is an avocation. If you're a playwright, you have a day job - and that day job for Draghi is cooking. However, when you're an Italian Amerian like Draghi, to say your profession is cooking is like claiming your job is to wake up in the morning and take a shower. Cooking is such a routine and integral part of any Italian's life. Cooking is an everyday responsibility.

And Draghi cooks every day. He hasn't taken a vacation in eight years.

"What am I going to do on a day off?" he asks. "Sit at the beach and worry about how my staff is destroying the restaurant while I'm not there? I work 80 to 100 hours a week. People are going to expect me to be there. People said something when I wasn't there the one day I took off in four years."

He likens this to the joke about a man who keeps hitting his thumb with a hammer, over and over and over again. When his friend comes over to ask why, the man says, "Because it will feel good when I stop."

To Draghi, chef doesn't translate to chief. It means cook. If someone throws down money for food at his restaurant, they want his hands touching it.  They want him in his kitchen.

Ninety percent of what Draghi creates in his kitchen is traditional Italian. People may think the bright colors and combinations of food served at Erbaluce are experimental, but they're not. He merges Italian classic recipes with American ingredients. He approaches local produce with an Italian vernacular.

"I cook without butter because most Italians cook without butter," he says. "It's heresy in professional kitchens, a radical departure. When I get cooks and start training them, they're confused that they're not putting two giant scoops of butter on everything."

Because according to Draghi, butter dulls flavor. Five to 10 times more salt must be used to overcome butter's flattening taste. Like Michel Guerard would say, all the flavor will be inside the ingredients if you take the time to source the good stuff.

It's for this reason diners don't get food comas when they eat at Erbaluce. They leave pleasantly full, without a food hangover.