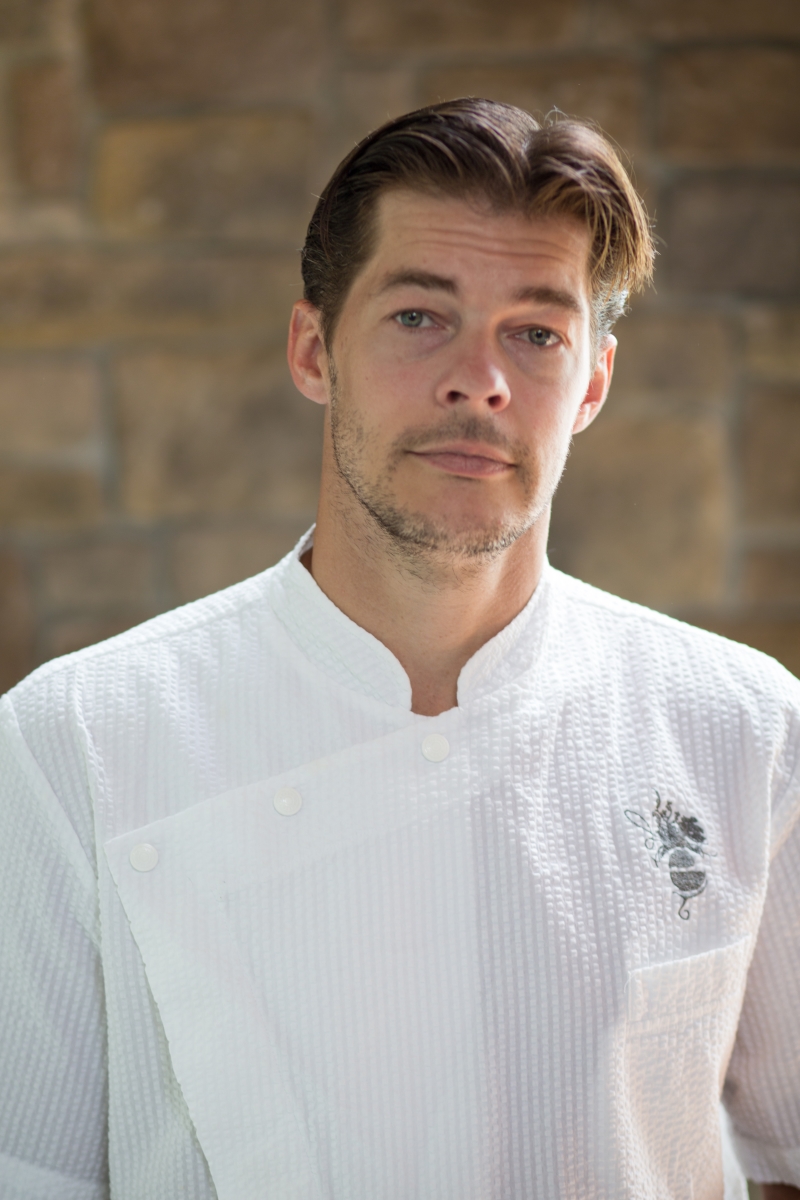 When foodies in Princeton want a forward thinking culinary adventure, they head to elements — Scott Anderson’s progressive modernist restaurant in the heart of downtown. Anderson calls his food “new age fine dining for the edgier soul.” His restaurant is recognized as a premier dining destination in the Mid-Atlantic.

The Best Chef crafts a new menu each day, featuring food from nearby New Jersey farms. He’s been dreaming up a different multi-course tasting menu five days a week — Tuesdays through Saturdays — for eight years, since elements opened in the fall of 2008.

Like many other chefs committed to serving the healthiest and best tasting products possible, Anderson is heavily involved in selecting what his restaurant sources. Some ingredients on his menu are foraged, found within a 10 mile radius of the restaurant. This fall, Anderson gathered wild mushrooms from the Sourland region, as well as chestnuts, hickory nuts, and black walnuts. In the spring, he focuses on wild herbs, flowers, shoots, and other edible plants.

There are nine tables inside elements with a total of 28 seats. Staff typically serves two full seatings every dinner service. There is a component of exclusivity to Anderson's restaurant. Only a handful of people can dine there. It’s a numbers game, that has more do with capacity than price point.

While dining, customers can watch Anderson in the open kitchen slicing colorful heirloom tomatoes, just picked off the vine. They can see his crew plate their courses on the many different styles of dishes showcased at elements — from crystal bowls to hand-fired earthenware ceramic plates. Anderson’s tousled brown hair is pulled into a messy ponytail. He looks like a cleaner Tom Hanks (sans beard), halfway through Castaway.

And the clothes he wears underneath his white chef coat reflect his one-with-nature lifestyle. 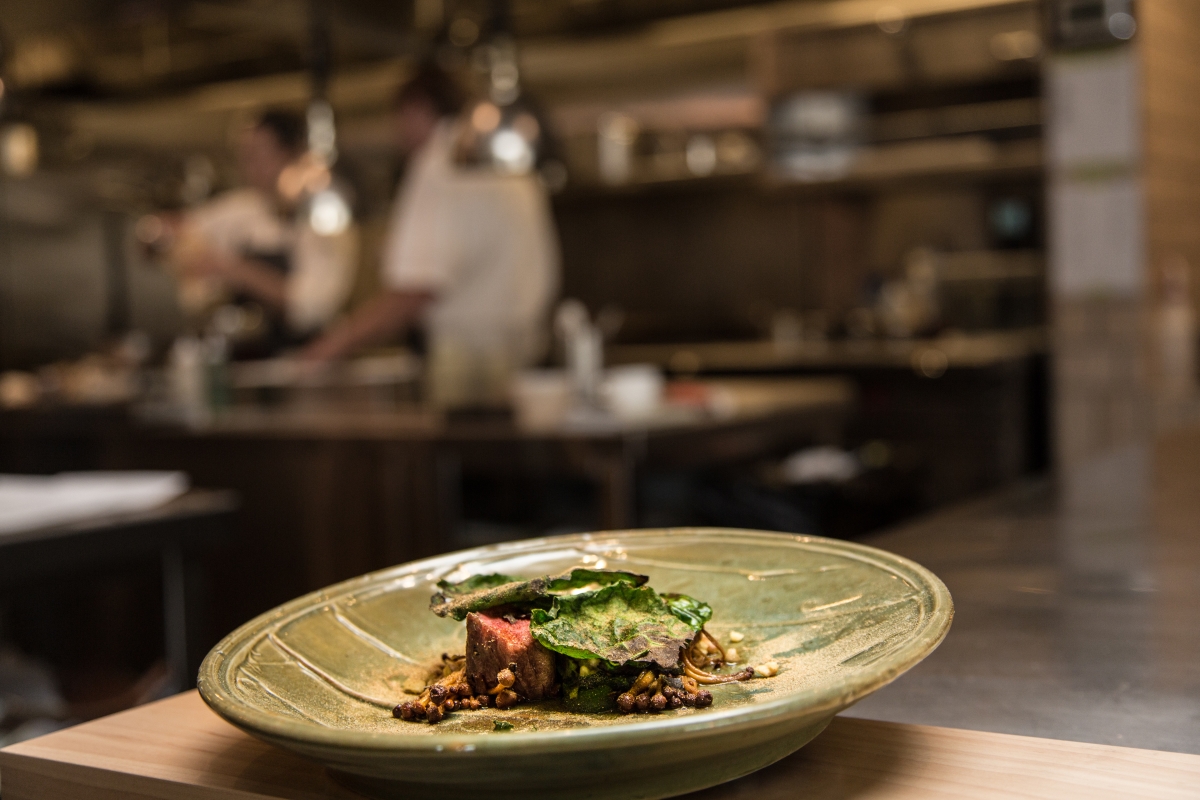 Anderson’s main inspiration for his menus comes from being outside, seeing what’s growing, and then mixing up unexpected flavors. He goes to local butcher shops and fisheries daily to see what’s currently available, and what will soon be available so he can plan future menus. Every day he spins the flavor wheel.

“I’m not afraid to be adventurous with my dishes,” he says. 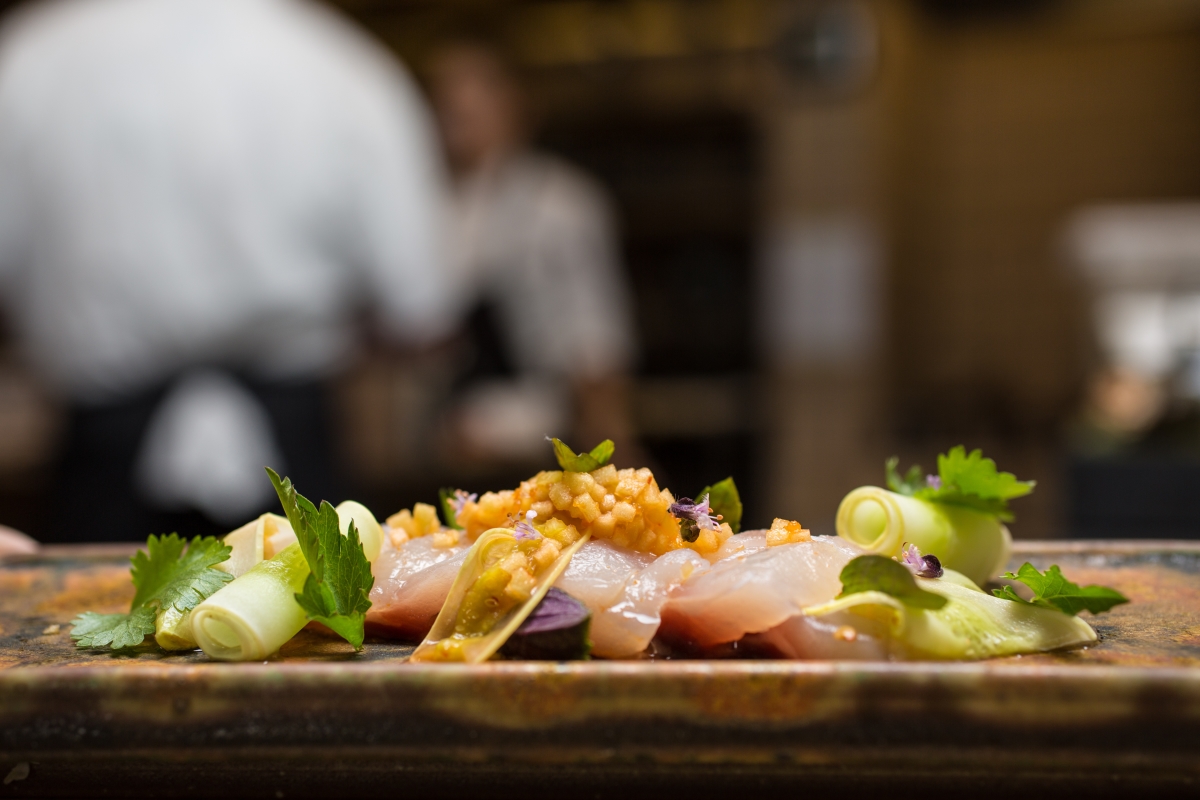 Many people come to elements to indulge in the tasting menu, which ranges from four to 22 courses.

“It’s a pretty well thought-out process on our part,” says Anderson about the progression of dishes.

He’ll begin with lighter items like seafood and then switch to land-based meats, that also start off light and get heavier. He’ll use ostrich tartare to transition diners away from seafood, because it’s light enough to cleanse the palate and heavy enough to prepare someone for what’s next. The goal is for guests to leave his restaurant full, but not too full.

There are two options for each course. White, warm wet towels are offered to clean hands between them. A different chef from the kitchen comes out to explain the platings.

There were two amuse-bouches served on the night we visited: a smoked quail egg, marinated in wine, served warm with a coagulated yolk without the shell in a twig nest, and bloody butcher grits made with red corn, fried into crunchy cubes.

It’s little touches that turn well-sourced ingredients into a delicacy. Anderson ferments his own soy and miso. The feta in his heirloom tomato salad is grilled. The bread is baked in the restaurant, like the seedy, delicious and dense spelt loaf.

Downstairs, past the velvet rope at the end of the stairwell, is Mistral — Anderson’s second more informal, yet equally eclectic, chef-driven small plates restaurant. Everything at Mistral is designed to be shared. It’s busier, a bit sexier perhaps, with a bustling bar scene. The ticket cost is lower.

Both restaurants deliver culturally-influenced, fresh and local cuisine that plays on American classics. Elements is more sophisticated. It’s the restaurant where 95 percent of the time Anderson spends his time cooking. Mistral is playful and familiar. Together they create dining experiences that offer something to everyone.

Anderson has been nominated for the title of Best Chef in the Mid Atlantic by the James Beard Foundation four years in a row. He’s nationally-known as a vanguard in the modern global cuisine, a genre that he calls culturally-influenced and interpretive. 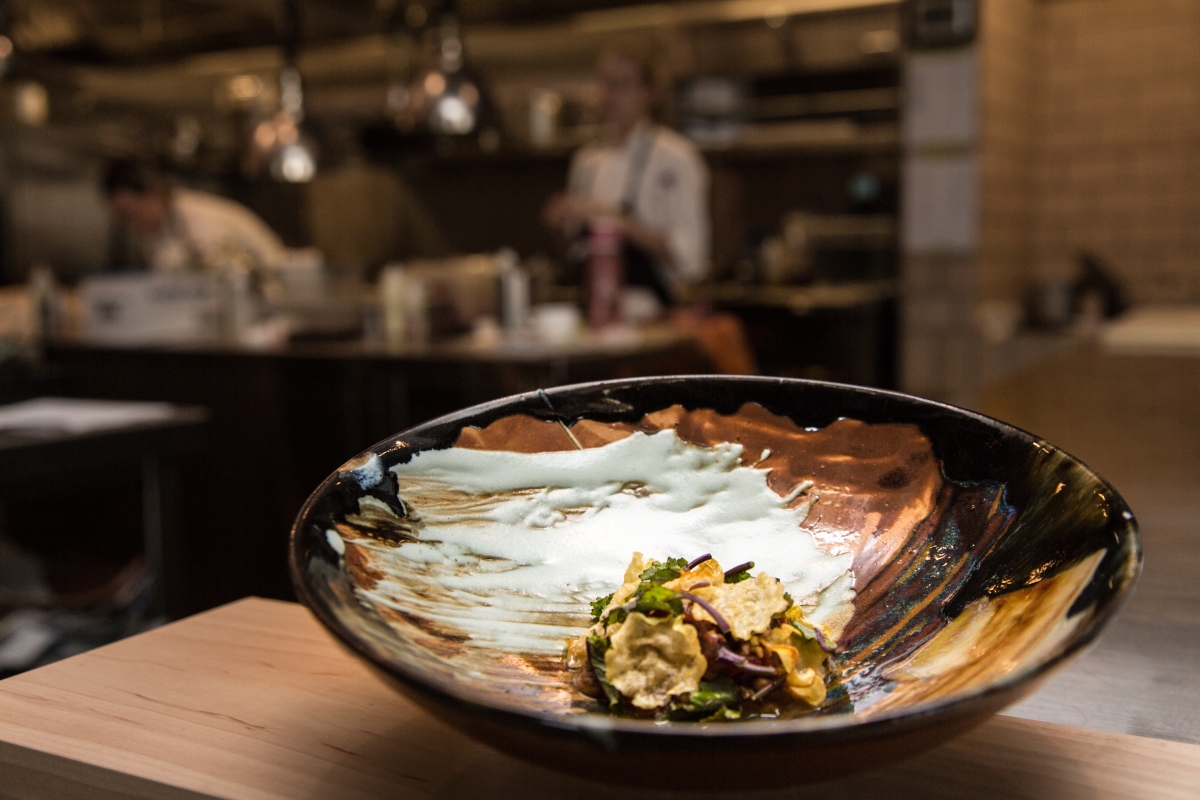 People say it’s a privilege to eat his food — because of the values he painstakingly brings to it, because of his inventive combinations and the surprises that each visit brings.

Chefs wield an influence on the eating habits of the collective. They can promote their interpretation of food as medicine, as a lifestyle, as a symbolic reflection of the human condition. It is for this reason that Anderson does what he can to expand and uplift the palates and food politics of the intelligent minds living in Princeton.