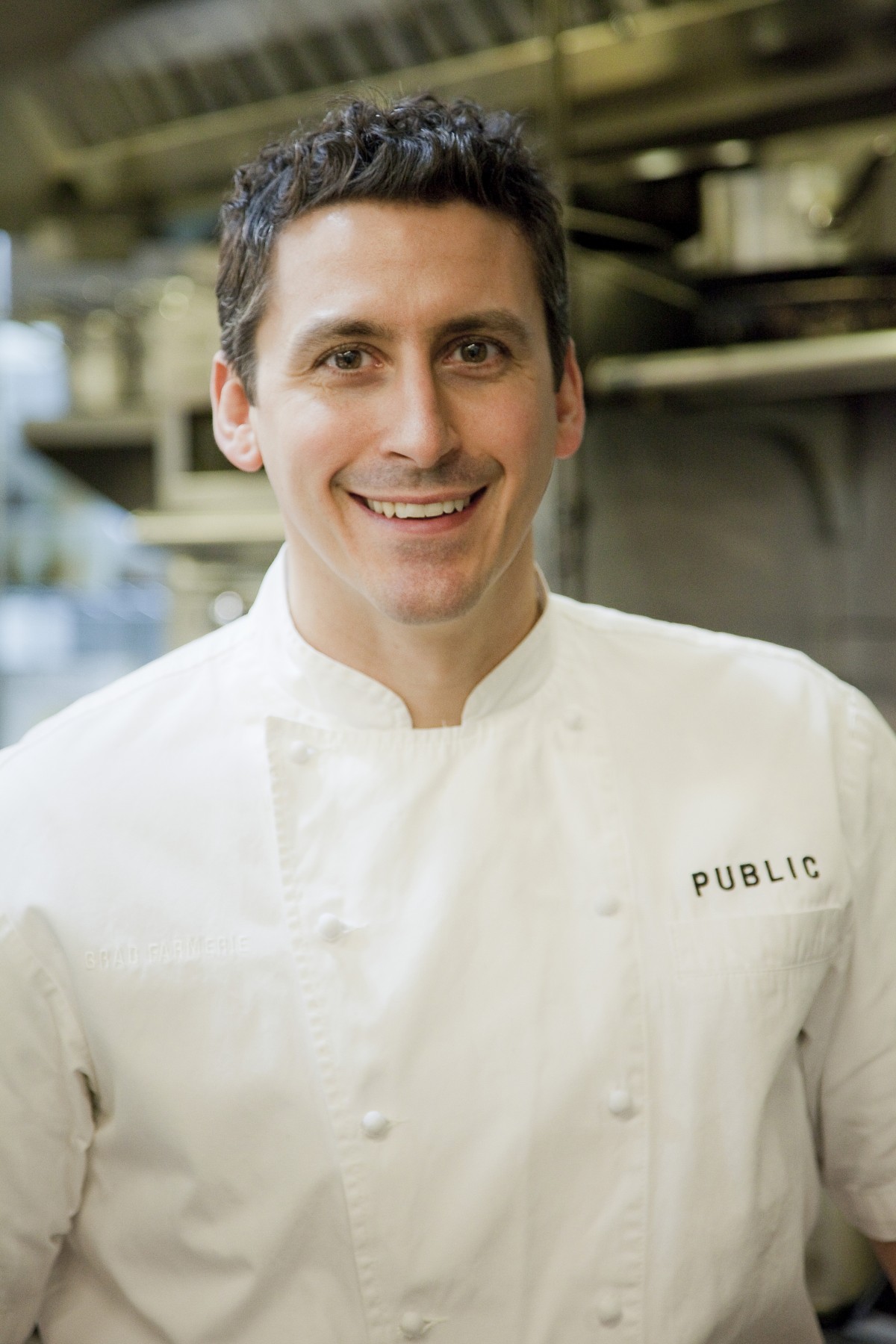 Public’s lively and dim lit, rustic and elegant interior has always been filled with fans of the rule-bending flavors in Brad Farmerie’s Michelin-starred fusion cuisine. As Spring rolls in, Farmerie and his partners at the AvroKO Hospitality Group are rolling out changes to the culture at Public. This includes a new menu, which launched mid-February.

A week or so prior to this particular Friday night, the bartenders mixing negronis or any of the hundreds of other cocktails indexed in Public’s specialty drink rolodex were dressed in suits and ties. Now they're wearing denim shirts with the first button undone.

Perhaps spirits are always high at Public. However, on this night servers seem elated at the chance to take service style down a notch. Bar Manager Brett Hughes strikes the top of a metal cocktail mixer with his elbow. His wingmen laugh and stir silver spoons inside highball glasses to the sounds of disco and an upbeat Terry Callier.

This neighborhood NoLita haunt been open in Manhattan for 13 years. Farmerie, the executive chef and partner at the AvroKO hospitality group, says he was happy when Public, his first restaurant, made it past the one year mark. He'd been cooking in London for nine years, when his brother Adam Farmerie (also a partner in AvroKO) recruited him to open Public. To start a restaurant in a city like Manhattan after living out of the country for almost a decade was an intimidating challenge. Since opening Public, AvroKO has significantly expanded, spearheading a number of successful restaurants across the world.

Farmerie identifies his main talent as menu creation. He visits the kitchens at all of AvroKO’s New York City eateries at least once a week, which include: Public, Saxon + Parole, Madam Geneva, The Daily, GENUINE Roadside, GENUINE Superette, and GENUINE Liquorette. He knows that just like people, menus need makeovers to stay relevant.

Public has long been frequented by diners celebrating special occasions. The current changes taking place will turn the restaurant into the type of destination people will eat at regularly. The new menu reflects contemporary casual dining trends. It features food that Farmerie and his partners like to eat every day.

“I’m starting to break down the formality of service and presentation of food,” says Farmerie. “I don’t like when a restaurant is so formal it’s uncomfortable. I want conviviality and to greet people like they’re coming into my home. I want them to be so happy they chose my restaurant.”

Over the years, he’s worked to prove his status in a city with an estimated number of 24,000 eating establishments. Now Farmerie says he’s ready for Public to be more of a two-way conversation rather than a dictation. He wants customers to be more involved in the dining experience.

His opening menu showcased kangaroo and Kobe beef tongue and other uncommon gamey and dark meats. It focused on New Zealand and Australian cuisine. And while ingredients from the Antipodes are still used, Public's new menu takes customers even farther across the world. The proteins are lighter. There are more vegetables. The vegemite braised lamb shank is gone for now, but the Down Under accent of General Manager, Sam Maher, and Alan Wise, Chef de Cuisine, remain. 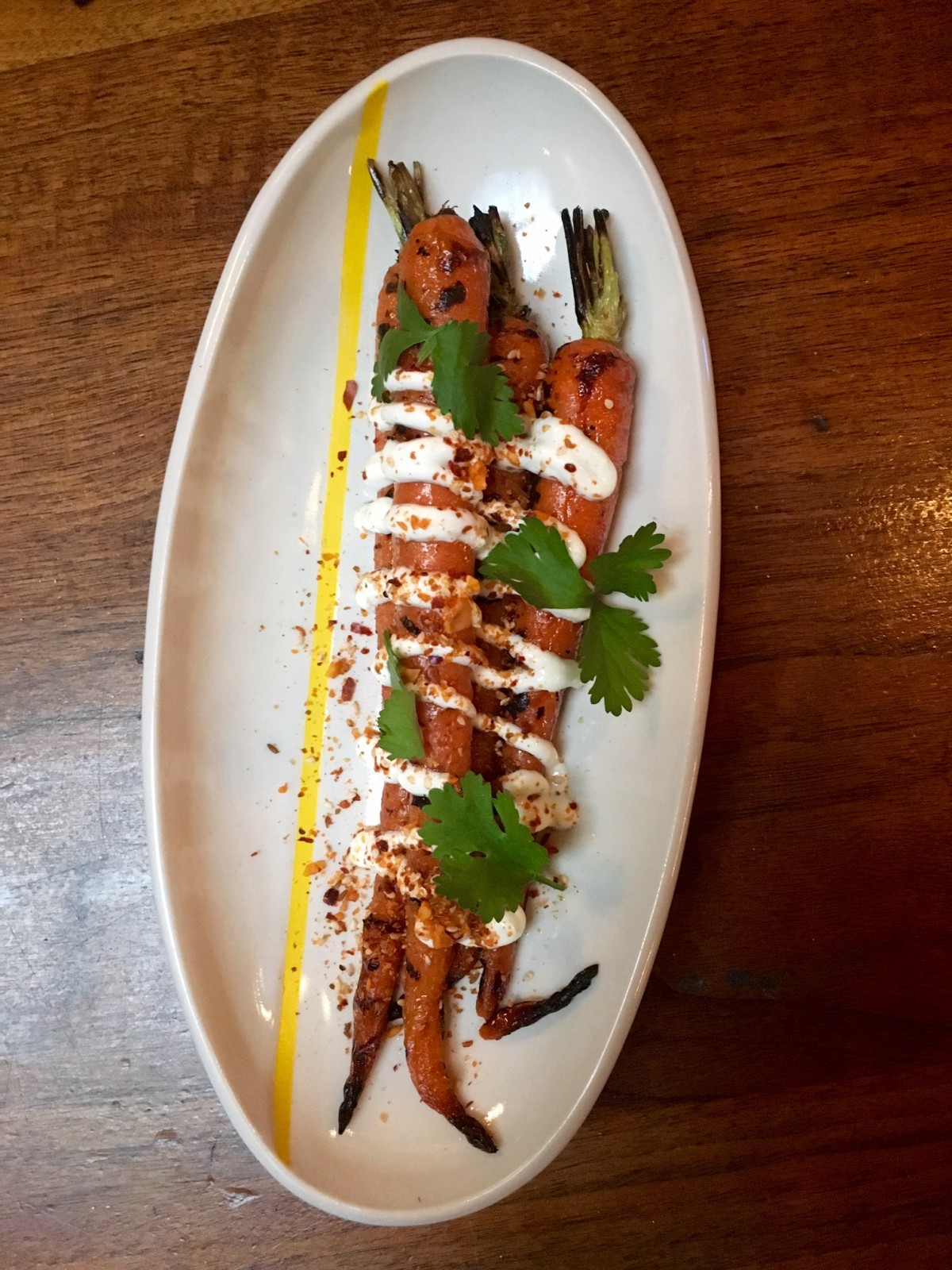 Farmerie's philosophy is to put his own stamp on classic food by incorporating ingredients people might think they'd never like into dishes that use historical flavor combinations. If he understands the many dimensions of an ingredient — how it smells, its flavor profiles, texture, and the way it transforms under heat — he can make it palatable by adding it to the right recipe. Every ingredient in the wide and wild food kingdom has its own unique utility that can be appreciated by any audience if it's used in a familiar fashion.

“When I take an ingredient that people think they don’t like and spin it in a way that makes them want to come back to my restaurant and have it again and talk about it with people they know; when I’m able to make people not just accept an ingredient, but love it, is the best feeling,” says Farmerie.

The curdy burrata, sprinkled with a salty, savory granola, is paired with roasted grapes clustered on the vine.

Order the laksa, and you’ll receive a tea cup filled with vermicelli rice noodles, thai basil, Maryland crab, a duck spoon, and chopsticks. A server will come by with a teapot to pour the coconut milk broth, seasoned with turmeric, galangal, dried shrimp paste, and candlenuts into your cup.

The grilled scallops are coated with a sweet chili glaze and plated on top of watercress. The salmon tartare is mixed with a piccilli blend of cucumber and cauliflower. 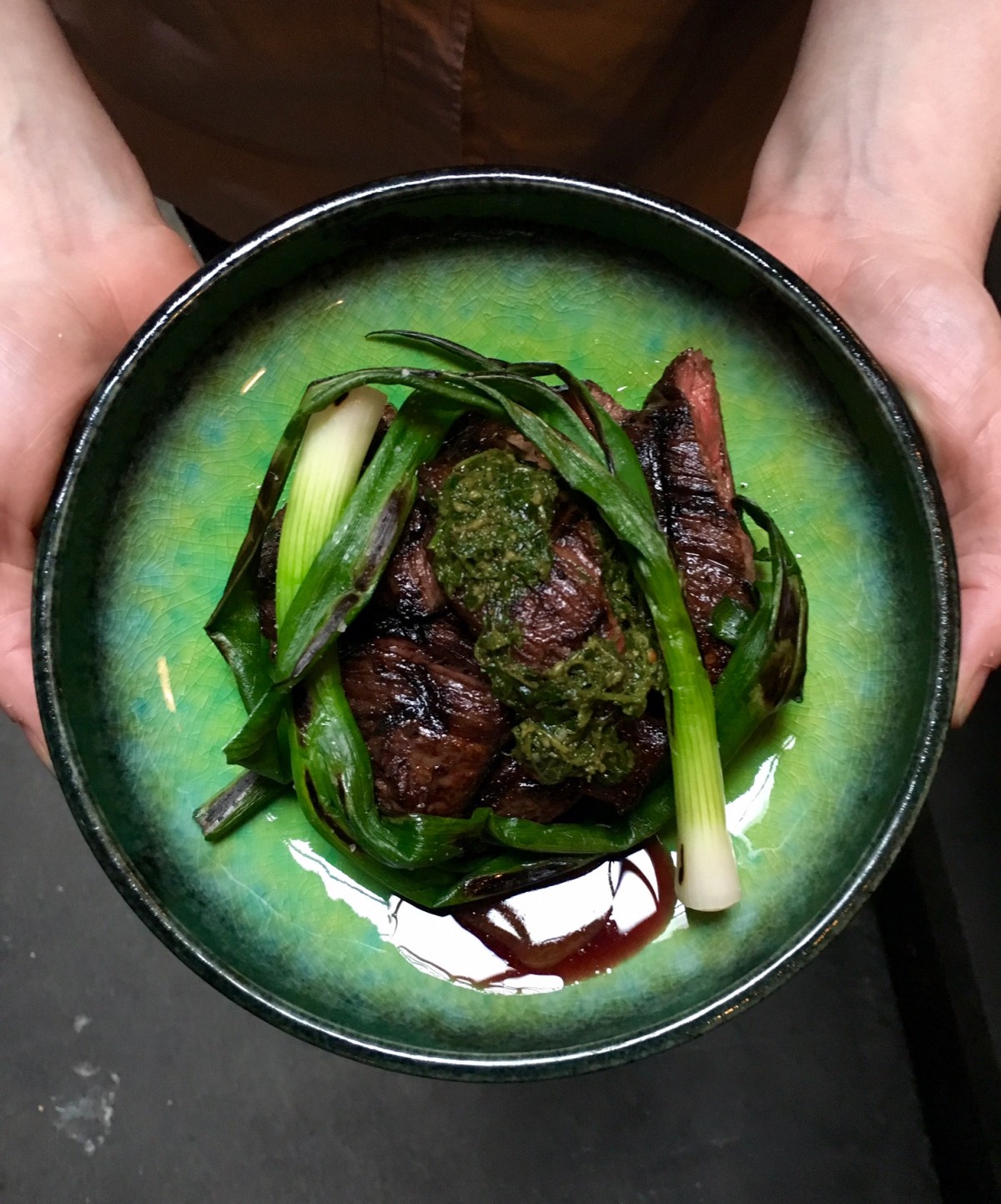 The bar at Public echoes the caliber of the cocktail culture made famous at Saxon + Parole (winner of the world's "best restaurant bar" at the 2013 Tales of the Cocktail Spirit Awards). Farmerie and his bartenders apply the same intent to innovate to each drink, from the gimlets made with rosemary and leftover cut citrus to the dark and stormy with house-made ginger beer that is carbonated to order.

Touches like custom furniture and bathroom walls with inlaid cages stacked with hundreds of bars of soap wrapped with the Public logo are just a few reasons why Public won the Best Restaurant Design and Best Restaurant Graphics award from the James Beard Foundation in 2004. The excellence of a restaurant’s brand lies in the visionary execution of detail — a talent AvroKO is acclaimed for. The bartenders even have Public temporary tattoos they’ll stamp onto your forearm to label you a believer before you walk home.

Public’s interior will also go through a renovation. The restaurant will stay open throughout the construction process.

Farmerie says Public’s new menu is directly inspired by his travels, especially the time he lived abroad. When he experiences a new cuisine in a different culture or tastes what another chef is cooking, it expands his curiosity and creativity. He knows that the evolution of a menu (or a restaurant) is never complete.