Chef Dylan Fultineer has known oyster farmers Travis And Ryan Croxton for years and when he heard they wanted to open a restaurant, he knew he wanted to be a part of it. Travis and Ryan were looking at a number of locations and Richmond seemed like it would work. Chef Dylan knew he wanted the restaurant to reflect the original concepts expressed at Blackbird in Chicago where he previously worked with James Beard Award winning chef Paul Kahan, “very earthy, down to the nitty gritty, bought everything from local farmers, ingredient based, focusing on the simplicity of things, having spectacular ingredients and keeping them that way.” Chef Dylan’s first confirmed menu item for Rappahannock was the Rockfish & Barcat Oyster Bourride with garlic, fennel, potatoes, poached egg and grilled bread.

Chef Dylan didn’t know anybody when he first got to the Richmond area and Rappahannock was not open yet so he utilized his first summer and did a lot of ground research. He would go to all the farmer markets in the area, “taking notes on who grows what and who grows what well, based on the soil and location, and pinpointing who wanted to work me.” Since some farmers do not like working with restaurants, Dylan made a point to work with them, “I lived out in Hanover County where a lot farms were located. I would call and ask what they have, go and get the produce right from the farm. I built a lot of relationships and got the farmers excited too and they started to grow things I would request.”

By “getting the staff together and doing perpetual training, going through the menu, products and techniques and talks about what terms mean and are,” Chef Dylan furthers staff development. He also lines up trips with the Rappahannock staff, “to go to the farms that we buy from and see how the produce is grown and the time and labor behind it.” A wide range of music is part of Rappahannock’s kitchen atmosphere, “I listen to a lot of jazz, the Herbie Hancock station and the hipster music that I can’t stand is a majority favorite.” 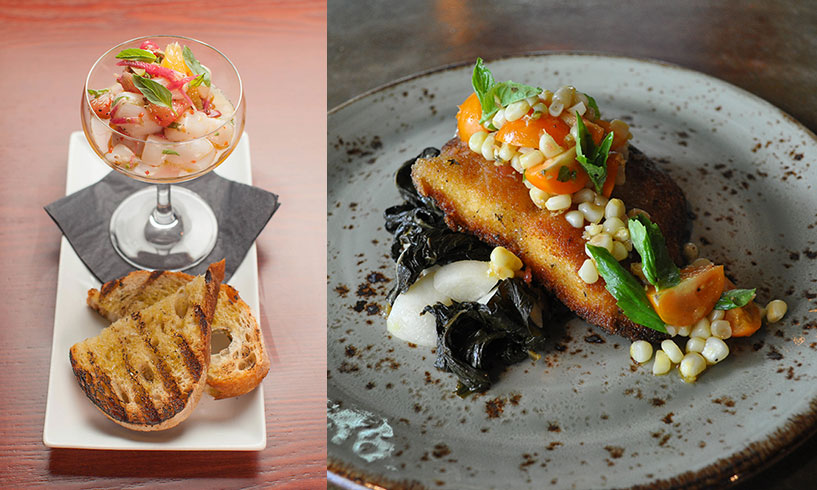 Richmond’s culinary scene is vibrant and has been growing and changing, particularly in the last two years. Chef Dylan comments, “its been one of those cities in the south that has been fixed on traditional southern food but its thriving now, restaurants are opening and pushing envelopes.” Some of Chef Dylan’s favorite spots in Richmond are Perly’s, “a Jewish deli with amazing matzo ball soup”, and Sub Rosa Bakery, “it’s a world class baker plopped down in Richmond with the best bread and pastries I have ever come across.”

Chef Dylan’s favorite way to prepare an oyster? “Raw, that’s the idea, I love them so much, one of my favorite things on the planet, and great on a slow smoking grill”.  Agreed.