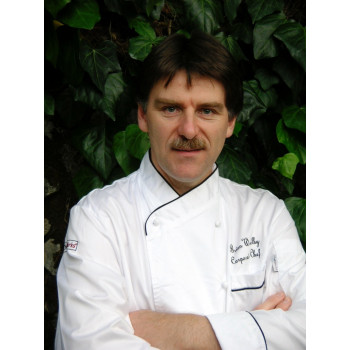 Brian Weselby is the Corporate Executive Chef for Forbes Mill Steakhouse. Drawing upon his wealth of experience, his mission is to create extraordinary steak and seafood dishes using the best ingredients available. Previously Corporate Chef for Tavistock Restaurants, LLC, he was challenged with overseeing the menus and chefs for six restaurant concepts including: California Cafe', Napa Valley Grille, and Blackhawk Cafe.

Born and raised on a farm in England, Chef Weselby grew vegetables in the family's one acre garden. During the early stages of his life, he learned to make bread and meringues from his aunt. He graduated from Plymouth Catering College and went on to work at several Michelin starred restaurants in England and France, finally settling in California. He has been Executive Chef at the Lion and Compass in Sunnyvale, Biers Brasserie in San Jose and Le Mouton Noir in Saratoga. In 2002, he received the Menu Strategist Award from the Restaurant Business Association for his creativity in menu development.