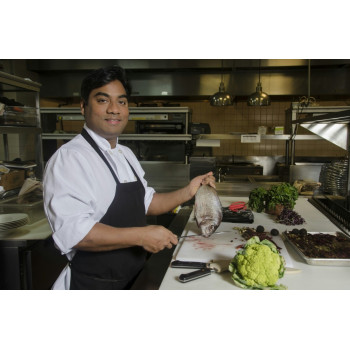 Chef Dheeraj Tomar is a native of New Delhi, India and is currently the Executive Sous Chef of the first Michelin starred Indian restaurant, Junoon, in New York City. Junoon is the epitome of authenticity and quality Indian food and caters to the ever growing community of food lovers in the United States. Chef Tomar's cooking style, which includes both pan and tandoor is synonomous with North Indian cuisine and garners rave reviews on social and professional media.

Dheeraj's professional journey dates back to 2000. He graduated from the culinary management training program at the renowned ITDC Hotel in India and has worked in the kitchens of famous Indian restaurants in 5-star hotels including the Intercontinental, New Delhi. Chef Tomar moved to Dubai where he worked at the Hotel Marco Polo, which was awarded the Best Indian Restaurant by Time Out. He then returned to India for another term at the Intercontinental, New Delhi. During this period Dheeraj was given much positive attention by the print media. His recipes were published, and he was widely acknowledged as an expert at innovating newer, healthier trends in eating. Chef Tomar moved to New York City in 2011 where he was at the helm in the Devi Group, Ltd. and then later moved to Junoon.

Dheeraj Tomar's cuisine has been featured at numerous NYC food festivals such as City Harvest and Harvest in the Square. His pristine reputation is an asset to any reputable culinary institution or restaurant.