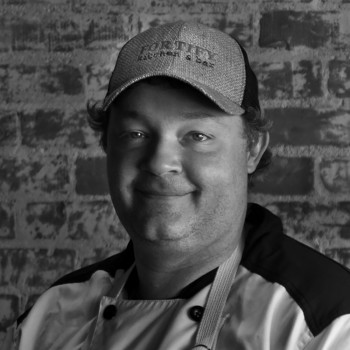 Jamie’s cultivated his passion and artistic gift for food preparation and presentation working at Chetola Resort in Blowing Rock, NC, with Executive Chef Jim Alexander at Charlotte’s Myers Park Country Club, and as Chef de Cuisine at Zebra Restaurant and Wine Bar.  After leaving Zebra, Jamie was recruited by Asheville’s Bistro 1896, and then for the five starred Eseeola Lodge in Linville, N.C, and then as executive chef at Ophelia’s World Cafe in Asheville. In 2010, Jamie accepted the Executive Chef position at The Lake Rabun Hotel & Restaurant, where he developed relationships with over 25 farms and raised the bar for culinary excellence and “farm to table” cuisine in the North Georgia Mountains.  In March of 2014 Jamie and his friend and Fortify co-owner Jack Nolan opened their own restaurant Fortify Kitchen & Bar in downtown Clayton.  It was an immediate success. Since opening in 2014, Fortify Kitchen and Bar has won numerous awards including: “Top 100 Restaurants in America 2014” by OpenTable.