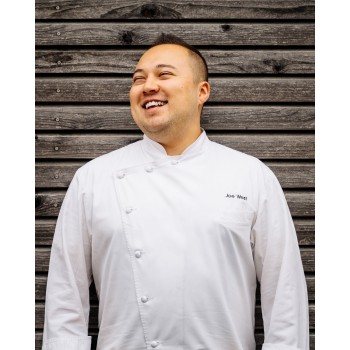 At the age of 16, Chef Joe West started his career as a prep cook at 40 Sardines under James Beard award winning chefs, Debbie Gold & Michael Smith. While attending college, West cooked full time at Adega in Denver, CO and Frasca in Boulder, CO. As an eager and young cook, he sent many letters to Grant Achatz and was invited to stage at Alinea in Chicago in the summer of 2005.

At age 19, Joe landed a job with Colby Garrelts of Bluestem in Kansas City, and went back Johnson & Wales University in Denver, CO. He graduated on the Dean's List. In 2007, Joe returned to Bluestem, but this time as the Pastry Sous Chef under Megan Garrelts.

Moving out to Las Vegas, West spent 3 years under Top Chef Master, Alessandro Stratta at his Michelin 2 star restaurant, Stratta. West then traveled back to Bluestem for a third time to become the Chef de Cuisine. He worked there for 3 years and was a part of the team when Chef Colby Garrelts won the James Beard Award for Best Chef Midwest.

In 2014, Joe was named the executive chef of The Cincinnatian Hotel, earning a AAA 4 diamond award. He also won the 2014 Iron Fork Competition, and was a semifinalist for Eater’s Young Guns Awards. West came back home and created a pop up restaurant concept called Kusshi that quickly exploded into a successful project. Joe West is now back home in Kansas City as the Executive Chef of Stock Hill, which is slated to open in late 2016.