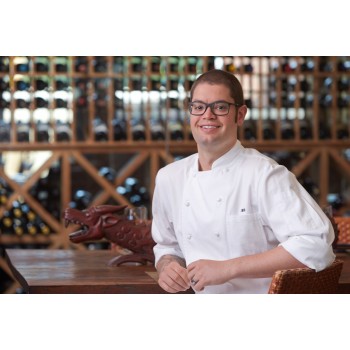 Joshua Hughes, originally from Travelers Rest, SC, found himself in the kitchen at a very early age. He spent numerous hours in his grandmother’s kitchen searching the spice cabinets and playing with different flavors and textures. He began his culinary career as an assistant to a pastry chef, and quickly worked his way through every station until he was promoted to sous chef. In 2011, Hughes made the move to join the team at the award-winning Herons restaurant at the Umstead Hotel and Spa in Cary, NC. He took over the position as sous chef under the direction of Executive Chef Scott Crawford and Chef de Cuisine Steven Devereaux Greene. During his tenure, Herons recieved its five star rating and AAA Five Diamond Award.