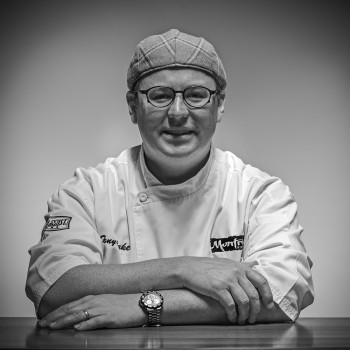 Executive Chef Tony Baker: Chef Tony Baker started his career in England. Following graduation from culinary school in Bristol, Tony worked in several highly acclaimed restaurants around the country including: Hintlesham Hall and Lucknam Park Hotel, moving to the US in 1994.

Montrio Bistro Background: For 17 years, Montrio has celebrated the heritage and craftsmanship of the local purveyor. From seed to fork, Montrio’s ingredients have always changed with the season -­-­ as nature intended. Montrio and Chef Baker are proud to continue that focus with even more emphasis on the delicious and seasonal ingredients that come from our local farmers, ranchers and fishermen.

Chef Baker’s commitment to sustainable ingredients and local purveyors has earned him praise and acclaim on a national level. Chef Baker's awards and accolades are extensive from the United Fresh Produce Excellence award, American Culinary Federation's "Celebrated" Chef of the Year award, Edible Magazine Chef of the year -­ Monterey and many others.

The celebrated local Chef, local radio voice, and television personality with appearances among others on “View From the Bay”, “Bringing it Home”, “The Rosy Chu Show” and a national television endorsement for the “Oven Glove” is doing his part to help elevate the nation's culinary standards. Throughout the years, Tony has demonstrated his uncanny ability to bring people together for great food, good fun, and a good cause. Often offering up his talents for local causes and community events, Tony, is often regarded as the “Artichoke Chef” for his long-­term relationship with grower Ocean Mist Farms, his ongoing online “Ask the Chef” series and artichoke demonstrations around the country.

Baker’s Bacon: Chef Baker founded his own brand of bacon in 2011 Baker’s Bacon. “I found a need for truly hand crafted British style dry cured farmhouse back bacon, from quality natural pork” After months of testing, he now makes three forms of his bacon and sells to the foodservice industry through distributors in a California, Oregon, Washington and recently adding distribution in Chicago and New York. Chefs are seeing the benefit of super premium dry cured pork products prepared with the chef in mind.

“feel good about what you eat”. 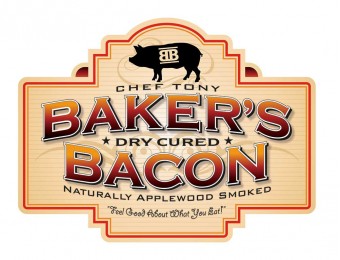